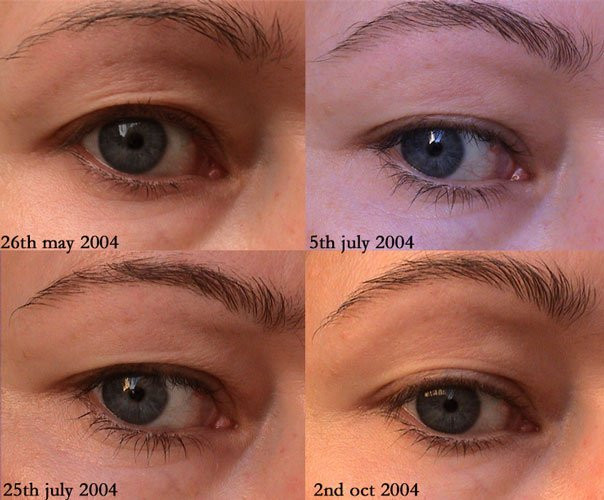 Goals : To get rid of the sagging of the upper lids, to diminish wrinkles (mainly around the eyes), and clear some brown spots that I have gotten during pregnancy. Yes: I want it all !

Routine: Ive introduced CP Serum on may 26th 2004. Ive used it diluted the first night and felt no irritation. So I tried it full strength the second night (4 drops for the entire face including around the eyes). As everything went fine, Ive been using it undiluted since then. But I must say that my skin is really tough and that most people should really work their way up slowly. I currently only use CP serum at night. In the last 2 months the only new products Ive included in my routine are: CP Serum, Exfol Cream and one 40% Lactic peel weekly.

Day: - Antioxidant serum and/or light moisturizer - Sunscreen In the next few weeks

These photos have been furnished by the customer as a courtesy and were take with a personal digital camera in natural sun light. There have been no enhancements, adjustments or alternations.