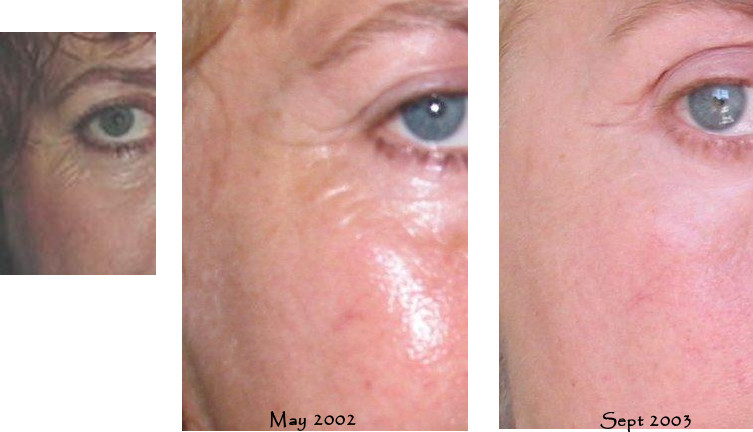 Is reversing the signs of aging really possible? This is my personal documentation of progress. At the bottom of the page you will find the large pictures where skin details are readily visible. I have tried to give you information about products and issues a long the way.

I dropped every product that I had been using to give the copper peptides a true trial.  I have spent nothing less than a fortune on products over the years (LaPrarie @ $300 a jar, PCA peels, and my list goes on, and on, and on.)  I, even as an esthetician, like so many, equated price and pretty packaging with quality.

So, my journey began...a plastic bottle with a bluish green serum and I must admit, a very large bottle of skepticism

I began working with Dr. Pickart's copper peptides consistently about November 2001. I had a very difficult time, especially around the eye area. My first go with CP Night Eyes was an inflamed disaster, I thought I might be allergic. I began working with lots of oils (squalane and emu), Protect & Restore Classic for the facial area and gradually introduced the CP Serum and Exfol Serums. I worked with both serums (CP Serum diluted) and oils only around my eye area for months, occasional testing CP Night Eyes. Even though I live in a very humid climate, my skin literally drank up the squalane and emu. I let my skin have whatever seemed to make it the happiest.

The changes in my skin within 6 months were just pretty unbelievable to me. It was others that noticed, not me. Those comments on my skin prompted me to grab that camera to see if I could see what others where talking about. Hence I began my journal of progress pictures to document my skin changes.  The OMG moment for me...had I really found a product that actually did what they said it would do. I continued working with CP Serum, Exfol Serum and lots of oil. I began to introduce the Exfol cream to try to speed that sloughing of the leathery old damaged cells that were migrating to the surface.

I began tolerating the CP Night Eyes but would have to apply lots of emu beforehand. I tested the TriRed on the facial area but still too strong...so I decided to use it up on my arms and legs (that's a whole other success story)

Around June 2003 I began introducing the Super CP Serum at night while continuing with my routine. CP Night Eyes and I became friends

So when you read about increase collagen, elastin, moisture holding...this is it..a real picture of what those words can mean if you are using products that are active and will do what they say they will do.

Big difference. The focus now are those two lines from several years of crows feet. I am not at all concerned with the remaining skin imperfections on my skin and am total confident in another 6 months, my skin is going to greatly improve.

With the crows feet I have been convinced that my repeated squinting is not going to help that area at all and if I can just reduce that squinting the copper peptides will work their magic as they have done. I began introducing the ATX (BTX) to help reduce that movement.

Highlights between the 2 pictures:

I took these photos myself. I simply hold my digital camera at arms length and shoot. The pictures are taken so that I can monitor changes, or no changes, in my skin. I can see skin details that are not visible in my 5x's magnifying mirror and were never meant for publication. These are raw pictures...clearly...no adjustments, enhancements, corrections or otherwise. I cropped them so that the pictures can load. 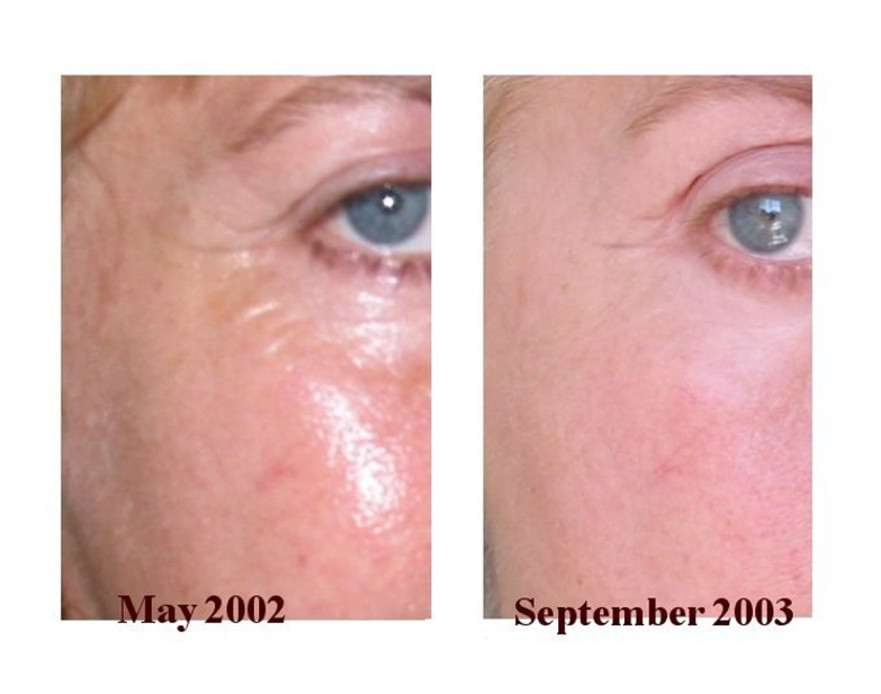